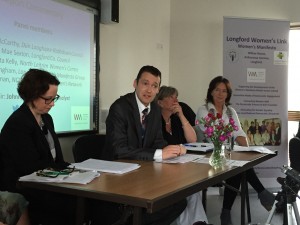 My name is Johnny and I used to strongly oppose the idea of gender quotas.  There I can admit it.  I was involved in party politics for many years.  I was of the system.  Once upon a time I even harboured hopes of becoming a TD myself.  I believed that candidates should be chosen on merit and that all was well with the system we had.  So you might ask what I did to prepare and educate myself for the task of being a TD, a legislator and a decision maker.  How did I go about starting to prove myself to those who would grant me the opportunity to put my name before the people?

Well I did what you have to do. You attend every meeting you can.  Every night of the week you will be going to something.  You make sure to say a few words at the meeting even if what you are saying is irrelevant.  You do not go home after the meeting.  You hang about, buy a few pints.  Cosy up to the people that matter.   If you are lucky you are either single or have a partner who stays at home and does the housework, leaves food out, looks after the kids, puts them to bed and accepts that you are not really around for most of family life.  You buy tickets, go to funerals, join the GAA club, the tidy towns, the drama group, the community alert committee, the school board of management and PTA.  If there’s a fundraising committee for something you make sure you are on it or supporting it financially.  You must be seen as a real community activist.  A go getter.  You stand over the biscuit tins; you shake the hands and get the picture in the paper.

That is how you become a candidate.  You will notice if you look at the professions of TDs many are either self employed or come from jobs with regular hours and flexible time to attend meetings.  Few executives or people who have to work late nights can afford the time to compete in this ‘milk round’.

I got out of politics.  When I did I saw things a little differently outside the bubble.  I began to research.  People like Claire McGing of NUIM have studied gender in politics in depth.  I found I could not argue with the figures.  The best I could muster was to suggest that the game just wasn’t attractive to women and that’s that.  I might suggest women didn’t want to do it and we had to accept that.  I found that argument weak though.  I began to think of many brilliant people I know who like politics but cannot run.

As my family grew I realised something else.  Our internal party systems have nothing to do with merit.  Merit would assess your ability to understand legislation, to contribute to policy, to debate, to inspire, create an image, to take decisions.  The system values none of those things.  We do not select leaders we select networkers.  The whole game is based on your ability to keep attending irrelevant meetings, functions and network in the bars, lounges and halls that it all takes place in.

Now sometimes a good leader is also a good networker and we get lucky.  Too often though we end up just selecting people because it’s their turn.  You know the type.  The 55-60 year old man who has been around forever and thrusts his leaflet into your hand listing hundreds of local organisations he has been involved in.

Until the 1960’s the male workplace had not changed much.  It was not a place that thought about family, there was no such thing as work life balance and your duty to the job came before all.  The advancement of women in the workplace changed all that.  They didn’t accept the old norms and rules and the way things always were.  Modern work is far more productive as a result.

Political parties have evolved informally around old male networks and habits.  You have to join this way of life to get selected.  Unfortunately women have suffered as a result.  For years women were expected to stay at home anyway.  Women venturing into pubs 7 nights a week would be talked about.  Women buying rounds of drink for men would be talked about.  I also have to admit that few of us men are willing to take a back seat to our wives.  When we are asked to put the kids to bed every night and be the support service we often get unhappy.  A female candidate recently told me that as she raced from a council meeting to get home to get the washing on and collect the kids from school a male counterpart told her she needed to get herself a wife.

I believe that Gender quotas are a good thing now.  I see them as a temporary measure.  A measure designed to create havoc and upset to this system.  They will do that so long as parties and individuals rail against them.  However, at some stage parties will have to accept its not changing.  As a result they will need to change how the party works.  Greater emphasis will need to be placed on the involvement of women.

This will mean changing the functions of grassroots from irrelevant meetings to real action.  Policy development, debate, and profile will all become the norm.  The party that wants to attract women will have to offer better opportunities for a grass root member to shine and prove their worth outside of having to attend stuff 7 nights a week.  They will have to provide a platform for someone to compete with the silent networkers and hand shakers.

We will all benefit as a result.  Many men who currently cannot abide this ‘milk round’ business but who would make excellent TDs will also take advantage of the new systems.  Candidate choice and selection will improve.  Eventually quotas will no longer be necessary.  Part of that is re educating the electorate.  We need people, especially women, who do not come from this ”milk round’ system.  We need them to prove that they can be strong TDs without all that nonsense and then voters will gradually seek out representatives based on different criteria.  It’s a long road, but not without its end.

I was once of the system.  When you are in it all you can see is how it affects you.  In truth I realise now that I was not thinking of my party or my country when I was opposed to quotas.  I was thinking of myself.  I was waiting on my turn to be a candidate.  I was worried I might lose out to a woman on the quota rule.  If I did what if she was good and retained her seat?  I might never get a chance again.

I had worked for years for this, playing the game.  Why should someone get there now just by walking in?  At no point was it really about who was the best TD.  All candidates have to believe they are.  At no point was it about any cause greater than me.  When faced with the harsh glaring reality of my own selfish narcissistic approach I realised I was wrong.

All the defences thrown up against quotas today about to one thing.  People who want their shot or people close to those who want their shot.  In the bubble it’s all about our candidate.  The party is second to that.  This should never be the case.  It is going to be a slow process.  I would still caution against trying to move too fast.  Let’s get to a point where we have parties fielding 30% female candidates with ease.  It’s not really a very big ask when you think about it.

Sadly parties have approached it incorrectly.  They are disorganised and only too happy to blame things on quotas when other electoral concerns and strategies are actually at play.  It’s a fight that is far from won but whenever in some happy day, it is, I firmly believe we will have a new system, more accessible and delivering higher quality candidates than ever before.  Weirdly, men will be among the big beneficiaries of this too as a growing number find the system mitigates against them now for the same reasons it has prevented women participating fully for years.