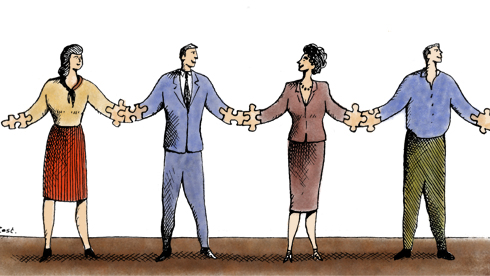 Anne Phillips seminal work ‘The Politics of Presence’ contends that female political representation is essential for the advancement of interests which are of particular importance to women. Gender quotas are used not as preferential treatment; rather they are an attempt to remedy problems of deep-rooted male privilege.

The merit argument is often advanced as a reason to oppose gender quotas i.e. that the best person for the job should be chosen irrespective of gender. All things being equal Phillps argues that that is not true, as outlined above. However all things in Ireland are not equal and as the Minister for Plain Speaking Leo Varadker put it – if merit were the only criterion governing the election of politicians, then the Dail would not be composed of 16% women.

Ireland is a signatory to the UN convention on the elimination of all forms of discrimination against women and Strategic objective G of the 1995 Beijing Platform for Action. However progress on voluntary gender quotas implementation by the political parties in Ireland has been a dismal failure. (O Keeffe, 2013)

The parties sought to implement a voluntary 30% gender quota to the local elections in 2014. However, the difficulties of implementing voluntary quotas became apparent – Fianna Fail fielded 17.1% female candidates, Fine Gael fielded 22.6%, Labour’s 28.9%, Sinn Fein 31.6% and People Before Profit did best with almost 40%. (Buckley, 2014).

Dr Adrian Kavanagh of Maynooth University points out that Fine Gael will have the greatest difficulty in meeting the quota because they have the highest number of incumbent males. Incumbancy is one of the barriers that women face more than men. Fianna Fail will also struggle but they have fewer incumbent males and therefore it should be easier for them to field new female candidates. However because they didn’t implement the quota in the local elections they do not have the pipeline of experienced women in Local Government or the Senate from which to select suitable candidates. However the legislation does not apply to local elections.

It will not apply to the local elections in 2019, Watch that space….

Ms Fiona Buckley of UCC and 5050 group member points out that the experience from other countries is that it takes on average 3 election cycles before parliaments see a significant increase in women’s parliamentary representation following the introduction of gender quotas.

The passing of the Electoral (Amendment)(Political Funding) Act in July 2012 was a recognition by the mostly male Dail that progress on gender equality would not be advanced without a financial penalty to the political parties. Clearly, the introduction of the gender quota candidate selection legislation was very welcome, if long overdue, in efforts to address the lack of women in Irish politics. The gender quota legislation is not a panacea, however. This problem of gender inequality is not only an issue between men and women but also between progressive men and those men who benefit from the status quo.

The recent controversy in Longford saw a gender directive being implemented and Connie Gerety-Quinn being the only candidate eligible to run. This is because the male leadership in Fianna Fail have paid lip service to gender equality. Think Averil Power, Mary Fitzpatrick, Deirdre Heney… the list goes on. If Fianna Fail is so in favour of equality for women why is it necessary for them to issue directives? The data shows that Fianna Fail don’t see gender equality as an important issue. When Fianna Fail start to implement the various reports that have advised them on how to change, then gender equality will become a reality within Fianna Fail.

Paul O’Mahony is @omaniblog on Twitter – his business is MarketingWriteNow.com  -he’s written & recorded this piece specially for International Women’s Day… Simple… I have a 6 year old daughter (& 2 sons too).  I want her to rule the world – or at least feel she could run anything she likes when she grows up…

As a parent, I feel responsible for bringing her back to Ireland –  from UK where she was born.  She had no power, no ability to influence where she grew up.  It’s my fault she grew up in Ireland.  That’s the way I think…

So when I got a chance to go to the Fianna Fáil Ard Fheis, I swallowed my pride – I buried my impulse to damn Fianna Fáil –  in favour of my will to be a good parent. I went willingly into “that good night“.

I support 5050 Group because…
it was formed to lobby for a better Ireland – for an Ireland in which my daughter could grow up taking it foregranted laws are made by women & men equally.  That’s what I want her to assume.  Unconsciously & consciously suck it up that she lives in an environment in which she can flourish…

I don’t want my child to grow up in a society in which men make laws & women pull strings behind the scenes.  Pubic life is for all.

For me this is a crystal clear issue.
Gender quotas are trivial compared with the big picture.  The really important matter is who makes the laws.   Who debates & votes on legislation…  who interprets the laws in the courts…  For me the best way to ensure my child gets an Ireland I can comfortably die in is for the Oireachtas of Ireland to be occupied by 50% of each gender.  Parliament & Constitution set the framework of culture, icons, symbols & flags that matter fundamentally.

Just to be clear…
those who oppose gender quotas in Irish politics may well be decent people – the only thing separating us may be the tactical question of whether quotas will lead to improvement.  But opposition to quotas may also disguise attachment to the status quo.  Those who oppose gender quotas are responsible for persuading me they are not “backwoodsmen” – conservative old codgers dedicated to putting gender equality “on the long finger“.

I have no time for those who oppose gender quotas in principle.  All I care about is whether people are on the side I favour, the side that will result in my daughter being free to apply all her talents.

Why support 5050 Group?
I’m clear on why I do.  Even if I fail to convince one single person to join the struggle to change Ireland for the better in this respect –  at least I’m clear on my desire.

Let there be change.

I’ll admit I’ve always been a radical.  I’m on the extreme wing of the gender equality in politics movement.  If it was up to me, I’d reserve 50% of the seats in Dail Eireann for women.  I totally agree with Kathleen Lynch when she says “I want to vote for mediocre women.”  As far as I’m concerned the quality can wait – I want the stats first.

This is an extreme view…
I can & do collaborate with people who don’t share my extreme view.  I don’t expect anyone to agree with me.  But I am fighting the good fight for a better world for my child.  That’s what a good-enough parent is meant to do, isn’t it?

I started off writing this
in a spirit of celebrating International Women’s Day 2012 – I end up throwing myself forward with the Suffragettes.  They are my mentors – even though I won’t pretend to know exactly how they all thought & acted.