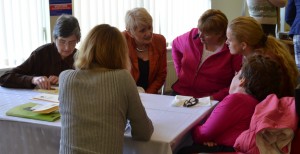 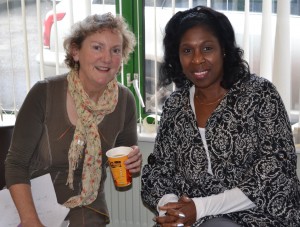 Donegal women interested in entering politics but not sure they know enough to do so received a memorable piece of advice from Senator Susan O’Keeffe in Letterkenny last week: “Fake it ‘til you make it”.

She explained, “Women are very conscientious, which is one of our great strengths, but there has to be a time to learn on the job and not worry about knowing everything. If you believe enough, you don’t have to know everything. There are people who will help if you are able and willing.”

The advice was one of a number of tips by women politicians from across the political spectrum at a “Meet and Chat with Your Female Politicians” event organised by the 5050 North West Group with assistance from NCCWN-Donegal Women’s Network and the North Leitrim Women’s Centre. The Group is part of a national 5050 campaign which is working to achieve equal numbers of men and women in politics.

“5050 is about changing the balance, to say there is a role in politics for women,” said Senator O’Keeffe (Labour), a founder member of 5050 North West and who has been a strong supporter of the 5050 campaign. “If we don’t step up, no one’s going to ask us.”

The event, which took place at the Cheshire Apartments featured roundtable discussions by the politicians with the approximately 35 women in attendance. Discussions centred on ways of overcoming the challenges women face in achieving political representation equivalent to the 50 percent that they represent in the population.

To date, women have never comprised more than 16 percent of TDs in the Dáil, a rate which places Ireland 25th out of the 28 EU countries in terms of female political participation. A new Irish Electoral Reform Act designed to increase the rate will see political parties losing half of their Exchequer funding if women do not account for at least 30 percent of their candidates at the next General Election.

One challenge discussed during the 5050 event was the need for women politicians to develop extensive support networks due to the unlikelihood of their having spouses who play the traditional “wife” role in the home.

“You need the encouragement of family and friends and people like that to support you” and provide “practical help”, former Tánaiste Coughlan said, adding that it was not unheard of for political meetings to “start at 11 and go on for three days because the boys have nothing else to do”. That said, she continued, “Politics is a great career. You meet a lot of people. It has its downsides, but it’s a unique career.”

Another challenge discussed was the adversarial nature of the overwhelmingly male political environment and the notion of politics as being a “blood sport”. The importance of developing a thick skin was mentioned as a coping strategy by a number of the women politicians, who expressed confidence that the environment will change as more women enter politics.

Cllr. Gallagher said her coping strategy is to remain as disciplined as possible in her focus. “I accept the argy-bargy for what it is: time wasting,” she said. “Egos and personal point scoring don’t do anything to enhance the lives of the people of Donegal, though it might get a headline. I would focus mostly on policy-making; if you don’t focus you can get dragged into a lot of rubbish.”

One challenge that there’s no avoiding, the women politicians said, is the sacrifice of personal time, energy, and attention involved in becoming a public figure, a.k.a. “public property”.

“I enjoyed my time in politics, but I paid a price,” said former Cllr. Doohan, who became the first woman mayor of Donegal during her 14 years on the Council. “If you put yourself forward into public life you will pay a price, whether in your relationship with your husband or your children.”

The financial end of entering politics is also a challenge, but one that can be overcome to some extent if you’re creative, according to MEP Harkin. “You need some money to run a campaign, but less than people tell you,” she said. “You can cut corners. Don’t believe you have to put up posters everywhere. Personal contact, talking to people, is important, if not by you then by good canvassers, so it’s important that canvassers know what you stand for and that you provide good training for them so they do.”

Participants at the event included a number of women who are interested in entering politics.

“I’m running for the Council next year in the Foyle area,” said Mary McCauley of Moville. “This is my first time ever getting involved in politics, so this is a fantastic opportunity to talk with women councillors and see what their experience is.”

“I came because I believe there should be more women involved in politics,” said Donegal Town resident Vivian McIntyre. “I believe it’s very important to have meetings like this and hope there will be more. Maybe sometime I would run for office myself.”

“I’ve been interested in politics and am thinking about running for higher office,” said Niamh Kennedy, who is chairperson of the Killybegs Parish Council. “The event has been great. It opens up your mind when you see everyone else in the same situation.”